Coyote hunting is a very old tradition in parts of the world. If you’re someone who knows the art, you’d like the support of a coyote call. And in this article, we’re reviewing some of the best electronic coyote calls out there.

Hunting is one of the oldest skills known to mankind. It alone paved the way for our civilization. When men lived in caves, their survival depended on their ability to hunt. From facing giant adversaries to protecting their children, and scavenging for food. Hunting was the way to survive. Generations have changed. Hunting became more of a competition or a hobby.

However, for people in regions close to forests, it’s still a means of survival. Quite often they have to pick up their weapons, go out in the wilderness and kill. To protect themselves, their family as well as their farm animals. One of the most common problems in such regions is the presence of vermin, such as coyotes and foxes. Also, coyotes skin and fur can be sold at a fairly high price. So coyote hunting is a very great way of making some money as well.

One of the oldest strategies of hunting is by luring the prey towards you. It can be traps, medicines, or very simply, sound.

Coyote calls can be used to make a loud cry and bring the nearby coyotes around for an easy kill. There are two kinds of coyote calls, the old school manual flutes that have been a part of history. Or a modern electronic coyote call, that can do a lot more than just calling coyotes.

While the market has so many coyote calls or similar devices, not everyone lives up to the quality.  In this article we’ve reviewed 10 of the best coyote calls in the market, to give the users an idea of what to buy and where to spend their money on.

Before you go ahead take a look,Which is the Best Time Of The Year To Hunt Coyotes

Also read: The Best Light for Coyote Hunting at Night

Icotec brought a revolution in the arena when they relied on their own mechanism for calling animals. Starting it off with a simple button option for each call. Pressing once will do the trick instead of relying on a phone number-esque code.

The device gives you the option to make two sounds at a time to create your own scenarios. Simply by pressing two buttons at a time, you can create two sounds. Also by the addition of the pause menu, you can pause and play sounds anywhere according to your advantage.

The product also features a long range remote. Using which you can create sounds from a distance of upto 300 yards. A very efficient tool for photographer and cinematographers

Also, there’s an available backlight feature that enables easy use during night. Along with a tripod mode which ensures more distance for the sound

The device consists of a powerful remote control, that features almost everything you need. With over 200 calls freely available on their website. You can choose whatever you need, import them on your device and get to work. You also have the option of sorting your favorites and using them frequently.

The call needs 4AA batteries and the remote requires only 9V batteries. Making it one of the cheapest and energy efficient devices out there.

The remote screen comes attached with a Micro SD card slot that can be used to import the required calls for the animals. The remote supports .mp3, .Avi and Icotec very special .ico files.

The remote can work from a distance upto 300 meters and has a special backlight to be used during night hunting.

The Inferno American Made Electronic Predator call is a very modern take on your standard coyote calls. Lightweight, compact and efficient; this consists of everything you’d need, without any hassle.

The inferno weighs only 1.5 pounds, lighter than most other products of this sort but can pack a punch. It can hold upto 200 calls in it’s system. With 75 calls being present in it at a time.

One of its major highlights is it’s powerful remote. It allows hands free usage as well as an option to store preferred types of calls, easy access of music and optional buttons that can be set according to users needs. It also contains the option to add an external speaker to amplify the sounds and makes life easier in the process.

As mentioned before, Icotec is one of the best electronic coyote call producers in the world. A hunter’s best ally no doubt. Icotec has upgraded one of America’s all time favourite call/decoy combination units. This new Gen2 series line of calls is for micro tech.
Body design modifications to the new Gen2 line include more user friendly handle for carrying and hanging on a tree limb, 360° rotating antenna, extended legs to cast the sound above vegetation, 1/4 20 insert to attach the caller to a tripod.
When you first get to GC320, you have to unbox the caller and remove the decoy. The decoy of this electronic is the AV400 and which has a preset five-second runtime with a three-second pause and it repeats that. The decoy can be controlled by the remote which needs 4AA batteries. These call-decoy combos come with two toppers for the decoy. The speaker is the size of 15watt. While the 320 has 24 sounds and decoy, the 300 has only 12 sounds, which means 320 is definitely better than 300. The 320 also has an AUX port for decoy control.
The remote range is 300yard which requires no line of sight and can play two sounds simultaneously.

Every product primos makes are field-tested and hunter approved. This electronic caller comes with excellent sounds. It can control a decoy or you can change the decoy button to serve as a hot button. It rotates causing no distortion. Simply putting a more realistic feel to the entire machine. This  attracts prey easily and efficiently.

The caller comes with 36 sounds and 4 programmed expert hunts. Produces long-reaching, ultra-realistic frequency ranges to maximize sound projection. Despite its promised 150-yard range; the clients are unable to believe so. Primos Dogg Trap E-Caller comes with a USB port for downloading calls.

Primos also provides a warranty of 1 year for this E-Caller. It needs 11 AA batteries in total between remote and call and has a very good longevity.

Cons:
• poor range limit
• form and function of the remote is quite clumsy

This caller is an inexpensive electronic for the beginner hunters. The deadbone
electronic caller is one of the simplest, lightweight calls on the market. Foxpro
has taken years of feedback from predator hunters and incorporated it into this
simple unit.

The Foxpro Deadbone is the Smaller Package of the Foxpro
Inferno and Foxpro Hellfire, both of which have some advanced, premium
features. However, this constrains the size, thus making it easier to carry and utilize when necessary. Also, it’s easier to keep and hide in the forest due to its size.

The units share some similarities like come pre-equipped with 50
to 200+ calls and also a remote with LCD in the unit. Moreover, the remote
comes programmed with 15 different sounds great for luring predators and
target.Boasting high definition horn-speakers this absolute unit can
deliver enough sound to accomplish any hunt also it Has the ability to play
2 sounds simultaneously.
Foxpro Deadbone is powered by 4AAA batteries and can last for an
entire session of hunting.Meanwhile, the caller maxed out at 109.3 decibels
at certain sounds marking with it the remote control distance is mediocre.

Made from ABS thick plastic it may sound cheap but rather it feels
premium-grade stuff on the hands and durable also has a grade of
weatherproof and plastic makes this unit lightweight which helps in
carrying.

Pros–
● Having only 15 sounds makes decisions simpler. Having too many at
times leaves second guessing and overthinking it.
● Without an LCD screen you’ll have less chance of reflections that can
spook predators.
● Lightweight, extremely portable.

Cons:
● The remote doesn’t have glow in the dark labels
● The unit can be difficult to use
in the dark for night hunting.

One of the best electronic coyote calls, this one is a complete system of its own. Instead of just a speaker and a remote, this is a kind of a survival tool. The remote contains an LED screen which contains a barometer, moon phase indicator, temperature indicator, battery level indicator, and a clock. This has all the makings to be your ally in the forest. Also, understanding of these metrics can help you locate animals easily. Because the position of animals depends on things such as the presence of water, rain, heat etc.

Unlike most products in the market, this isn’t a single speaker unit. This is a two speaker unit with four tweeters and two horn speakers. The unit also gives you the option to move the sounds from one speaker to another to give a more realistic feel to the sound. Also features a mix feature allowing you to mix two sounds at a time to add a more realistic feel to it.

This is also pretty energy efficient as it requires only 10AA batteries, but can do a lot more than its competitors.

The Lucky Duck E-caller is a simple take on a lot of complicated things. However, it’s simplicity can get a lot done without any hassle.

To make matters easier, this device comes with a very useful, and very efficient decoy with it. Decoy, paired with the sound system, is more likely to bring prey than just a call.

It’s an entry level electronic caller. Thus catered mostly towards the beginners in the business, while packing a punch for the more experienced ones as well. The remote control can work from a distance upto 300 feet, even without the line of sight.

The device comes packed with 12 pre recorded sounds. All of them recorded by the legend himself, the Verminator, Rick Pallet. These expertly curated calls can be lot more helpful than what you get in other products.

This specific electronic caller brings a lot more to the table than just a caller. It calls itself a “redneck dream” and rightfully so.

The device comes with a wireless motion decoy, that can work from a distance of up to 30m from the caller.

The caller comes with a remote that can work from upto a 200m distance without the line of sight. With three 50 watt Class D amplifiers, this brings a very amazing depth of sound. There’s also 100 sounds and very expertly picked and modified 8 hunting sets that are tried and tested by hunters.

Another great addition is the build. It’s very high end and very durable. Also, has a camo look to it which makes it easy to hide in the woods. 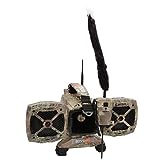 While coyote hunting can be hard. Having one of the best electronic coyote calls can definitely give you an advantage.

Coyotes are very smart when in their own habitat. While they can surely make existance hard for you, getting an edge above them.is hard if you aren’t prepared.

The coyote calls are very efficient because they’ve come a long way from just mere mouthpieces. They have their own systems, and companies are working tirelessly to make it even more effortless.

The market, however, is very competitive and new products arrive every once in a while. Not every product is high quality, neither are they tried and tested. Thus, we’ve looked into what’s available in the market and tested their quality to determine the best products out there. The review contains some of the best stuff available, and hopes that it’ll help both amateur hunters as well as war waged veterans.

We will be happy to hear your thoughts